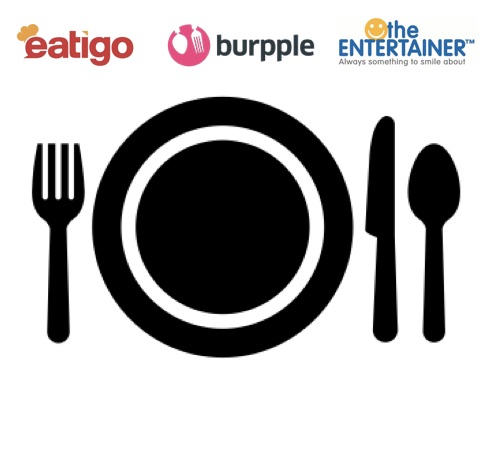 Do you enjoy eating out in Singapore, or do you enjoy restaurant and café-hopping? You may want to take a look at three applications – Burrple Beyond, Eatigo and Entertainer – that may help you get the most out of your dollar! Each offer good deals, but what makes each of these applications stand-out, and which application should you utilise?

In this article, I’ll be comparing them based on two main features – Cost and Types of Deals.

Burpple Beyond and Entertainer both run on a 1-for-1 subscription-based model. Deals are specifically 1-for-1 and works best for groups with even numbers. Also, for each restaurant, you will have four deals that you can utilize.

Burpple Beyond offers monthly or per annum subscriptions, which can be further sub-divided into all-day and off-peak deals. Essentially, all-day deals means that you are able to utilize the deals any time of the day whereas the off-peak deals can only be used at certain periods of the day.

Entertainer’s subscription model is an annual subscription, per calendar year. From October to December yearly, Entertainer begins promoting for the next year’s deals. It usually costs just under S$100 (which works out to less than S$9/month). But what happens if you would like to subscribe to Entertainer mid-year? As the deals run by calendar year, Entertainer sometimes provides a cheaper deal mid-year as the lifespan of each deal has reduced.

Eatigo, on the other hand, works on a discount-based model. This means that there is no cost involved when utilising the application.

Burrple Beyond has 1-for-1 deals for mid-price restaurants. Deals include those from One Man Coffee, Egg Stop, Megumi Japanese Restaurant, Shin Minori, and even Dunkin Donuts. It has a huge range of deals from donuts and sandwiches, to meals at a Japanese restaurant. However, I’ve got to say that certain deals make me feel a tad “cheated” as they include only a 1-for-1 appetizer. Considering that you can only use vouchers based on the number of people, you may not get the best bang for your buck in small groups.

Entertainer’s 1-for-1 deals, on the other hand, tackles mid-price to high-end restaurants. Some of the mid-price restaurants are also often available on Burrple. The deals on Entertainer are slightly better (i.e. 1-for-1 on all mains in Entertainer compared to a 1-for-1 on pizzas/pastas). They are often less limiting. As you accumulate points per deal transacted, users have the option of buying back deals if they would like to head back to the restaurant again – it isn’t very easy to accumulate points, but hey, at least there is this option. In addition, Entertainer has more than food deals, they have deals under the Lifestyle and Travel section which offers more 1-for-1 experiences. Deals are also not limited to Singapore and often come with other cities’ (based on your subscription).

Eatigo users are able to score deals (generally during off-peak timings) of up to 50 percent of the entire bill, less drinks. However, you’ll have to plan your meal in advance as you’ll need a booking (that secures the discount) before you head to the restaurant. Restaurants that are available here include chain restaurants like AOne and Harry’s –but deals may vary based on the outlet and timing. Eatigo is also available in Malaysia, Hong Kong, Philippines, and Thailand so do look out for deals if you’re heading to these countries as well!

So, which application would I recommend?

As Eatigo is free, I would recommend that you always look through Eatigo first as Eatigo does not limit the type of items that have discounts (less the drinks). However, the deals are time-specific, and you always have to ensure that you (and your party) are there at the specific time as there is only a 15 min grace period.

Burrple is good for starters if you are looking out for mid-priced restaurants. I would personally use Burrple more because even if there is a 1-for-1 Entertainer deal at a high-end restaurant, the cost per pax is usually much higher still.

Entertainer is good if you enjoy exploring high-end restaurants and it is easy to “recoup” your costs by simply having a meal at perhaps, Fat Cow.

These applications have definitely helped me save a lot of money. To date, I have saved almost a whopping S$748 within a span of 10 months!

P.S. Sign up with this referral code CHLO341 for a Burrple subscription and get 20 percent off the annual fee – first time users only!