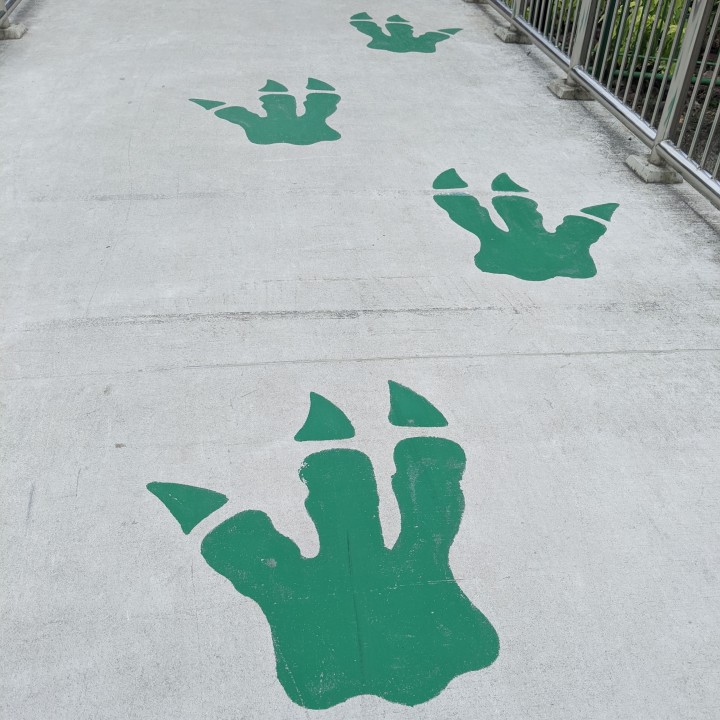 With travel almost non-existent, many in Singapore are suffering from a massive withdrawal. While the government is trying to encourage local tourism, it just doesn’t feel like the real thing of hopping on to a plane, landing in another country and taking in the sights and food!

As we struggle with the travel withdrawal symptoms, there was a glimmer of hope when social media broke news of a new attraction in Singapore. Dinosaurs (not the living kind) were spotted near Changi Airport.

As an avid cyclist who enjoys riding along the airport route, this was right up my alley and I started planning for trip to the said part of the airport. However, my plan had to be shelved when the authorities boarded up the location and placed a “Coming soon” sign.

Imagine my delight when a friend messaged me that the new attraction was opening on October 11.

The next day, I packed my bike and headed to the nearest car park in East Coast Park. Even though it was a Monday, that part of the park was surprisingly busier than usual with walkers, joggers and cyclists, including a couple of young ladies who were struggling big time on a tandem bike.

I joined them and headed towards the freshly-minted Jurassic Mile at Changi Airport Connector. The route was fairly straightforward, just cycle towards the Eastern end of East Coast Park and follow the signs.

The path is wide enough for three bikes to ride astride so both bikers and walkers/joggers need to exercise lots of grace and patience, especially along spots where people stop for photos.

A surprise is that beyond Jurassic Mile, the park connector extends all the way past Changi Airport Terminal 4 to Terminal 2.

The end point is the Terminal 2 arrival hall next to the car park.

Here are my thoughts on Jurassic Mile:

If there are areas of improvement, my wish is for some form of interactivity with the exhibits instead of them being purely static. Another is for the path to be wider so that it’ll be safer for all.

Overall, this is a place that is worth visiting at least once. I can foresee myself heading there again and again.

One thought on “Jurassic Mile rocks!”