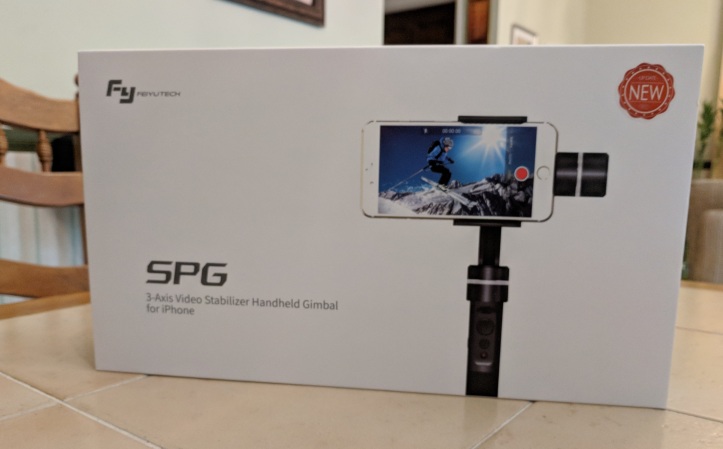 One of the biggest problems with taking video clips on smartphones is stability, especially when capturing clips while on the move. No matter how good the phone’s camera and software is or how skillful the user is, it’s near impossible to get jerk free videos while running.

One solution is the gimbal, which is gaining popularity among the media, bloggers and video enthusiasts.

Imagine my joy when my daughter got one for me yesterday. Her present to me was the Feiyu SPG three-axis video stabiliser handheld gimbal.

The box looks really large for something I had expected to be much smaller.

This gadget comes in an interesting-shaped bag, kind of reminds me of a steak.

After unboxing and pulling the gimbal out of the bag, I inserted the battery, slotted in my smartphone and tried to get in up and running.

Here’s where it pays to read the instructions carefully.

For all my efforts — all of 30 minutes — I struggled to get my smartphone to balance on the device.

After charging the battery and following the instructions,

Lesson 1 is to read the instructions. I should have referred to the set up notes.

Lesson 2 is to charge the battery. I had assumed that it was at least half-charged, like most that come with smartphones. But I was wrong. It was totally uncharged.

Lesson 3 is to download the app, without which the smartphone cannot be paired to the gimbal.

By the time I was done charging, my daughters were back and they took over the setting up.

With the phone adjusted to balance on the holder, turning on the device automatically balances the phone.

The Feiyu SPG works only with the app, which is used for communication and capturing photos/videos.

The first couple of test clips looks great but I’ll have to spend more time getting used to it.

I’ll post a more detailed review another time. Meanwhile, here are a few reasons why I like this gadget already: